April 2016 – I think Kristy finally got tired enough of me talking about building a Factory Five Hot Rod that she just told me to shut up or buy it, so we talked about it and pulled the trigger on the first phase.  Giddy doesn’t begin to describe my behavior when I got the email saying that my kit was ready.  In a strange effort to avoid shipping costs and a desire to see the Factory Five shop, Kristy and I decided to rent a trailer in Houston, pull it up to Massachusetts, pick up the kit and drive it back down to Houston (a quick 3,000 mile trip!).

Since I was going to be doing a lot of work in the garage, in Houston, in the Summer I decided to do a couple upgrades (which were included in my project budget) prior to picking up the Rod.  These included: A/C, insulating the garage door, and best of all a childhood dream of mine… a car lift! 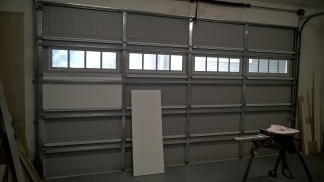 We kicked off our road trip over the 4th of July weekend with a long haul to Cincinnati to visit her Sister and Brother-in-law, a quick stay, followed by another long haul up to Boston, and another quick stay up there for the 4th.  Once we made it to the Factory Fiveshop, we got a tour from the team up there, loaded up the truck with the help of the guys and headed off for Kentucky, another quick stay and then a final run back to Houston.

We made it safe and sound with minimal damage to the goods (one seal on the IRS center section got chewed up after rubbing against the frame for 1,500 miles, but it was easily replaced.)

So with the frame safely in the garage, and the other half of the garage completely occupied by boxes of car parts, the adventure began…