After having successfully adhered flat vinyl to flat sheet metal, the challenged was stepped up just a bit for the waterfall.   Factory 5 provided plain black vinyl for the waterfall that you are supposed to adhere (seriously.. watch how to do it on YouTube).   However, I wanted it to have a bit more pop, so we stuck with the two-tone theme and added some ivory vinyl, quilted stripes behind the seats.

I cut the very nice piece of black vinyl they gave me into three pieces, and sewed two strips of ivory in between, measured so that they would end up behind the seats.

After this, I was bad about taking pictures, but basically, I took some of the new headliner I purchased and spray basted it to the back of the ivory section.  This would allow some cushion and make it stand out from the flat black.  I then quilted a seam down the center, as well as added some seams in coordinating thread to the outside of the black and ivory sections.  The sewing machine bobbin pulled a bit, so we had a lot of extra thread in the back that would have come apart if we weren’t cementing the entire piece onto the fiberglass – lesson to have another person help with the sewing by making sure the vinyl stays taut.

Drew then became a professional vinyl applier.  Working in sections, he slowly adhered the vinyl to the waterfall with contact cement.  It actually stretched pretty well around all of the curves.  We started with two pieces on the edges.  I think that the directions provided from Factory 5 said to do the same.  We had some issues keeping the very concave curves in place, but luckily they get covered by the seats so no one will ever know.. 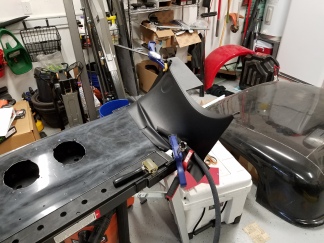 Another upgrade, I stitched the edges of our two-tone piece that would go over the vinyl edges.  The directions didn’t say to, but it looks a lot more finished.  We clipped the edges and brought them around the outside of the waterfall.  Overall, we are very impressed with the amateur upholstery job – and are much happier than the plain black (at least I am, I think Drew likes it (correction – he says he “really likes it).