Its Christmas time, which means in our house we are rushing to finish projects.  The weekend before Christmas, I was finishing a quilt to send off to Wisconsin, planning out a children’s teepee project for our niece and nephew, and the body panels of Drew’s hot rod arrived by 18-wheeler on our tiny Heights street.  The teepee was started a mere few days before Christmas, but it all came together nicely.

I used a few online tutorials to get the pattern for the teepee project.  My main materials are two curtain panels from Target, which were less expensive than 9 yards of thick fabric.  I saw many other blogs where painters canvas was used, which would work – but isn’t that colorful.  I also made all the bias tape from fabric that the kids’ mother gave me from her previous classroom decorations.  Drew took care of the dowels – 5 x 1.5″ x 6′.

My cutout dimensions of each fifth of the teepee was  parallelogram  37″ wide at the base, 9″ wide at the top, and 55″ high.   For the door fifth, I had to cut a half out of each panel, but that allowed me to reuse the curtain seams as the door opening seams.  These measurements include seam allowance and account for the space needed for the pole pockets – which I sewed using a French seam method and are on the inside of the teepee. 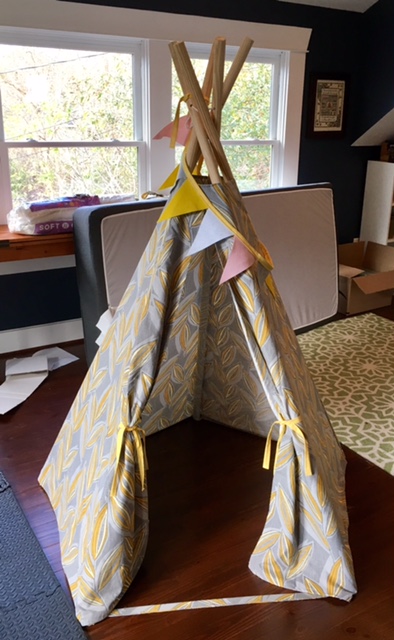 I also made a quick banner using the same yellow fabric and felt – I just felt like it needed something extra.

It was a success – the kids really liked it and would watch movies and play inside for the rest of our holiday week.