Its been a while since the last update, been working on getting the exhaust in and finally got it sorted after some corrections from FFR.

I must say that working on the exhaust on the lift has made it much more convenient for fitting everything in, especially since FFR has designed a pretty impressive system that sandwiches the exhaust completely in between the top and bottom tubes of the lattice frame.

Initially I had an issue with the first pipes fitting since I apparently got an old run of pipe which had the flange welded on the wrong end.  I spoke with FFR and they promptly sent me out a new set of pipes which all fit pretty well.  You can see the mirror polished stainless steel which looks pretty awesome.  I am sure anyone looking at the underside of the car will appreciate it.  6 mounts and some cutting and grinding to make sure they were flush with the frame top and I had the exhaust in.  I think I still have a bit of adjusting to do since they arent as far back as I would like, but we will see how they fit on the body. 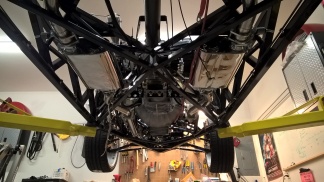 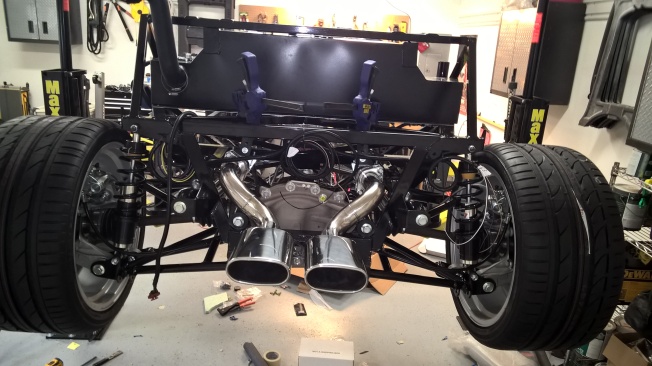 I have the pipes centered up in the rear instead of split because thats the only way I can clear the IRS mounts.  However, I think they look pretty good close together like that.  I have about 3/4 of an inch between the mufflers and the floor panel, so hopefully it wont get too hot, but the insulation should help with that.

Next up, finish some of the wiring and start this bad boy up!